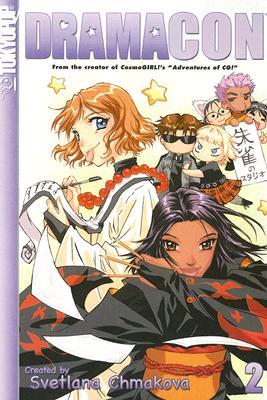 During Christie's second year at the Lakeside Anime convention, her new partner-in-crime, Bethany, is again promoting her comic, but this time in its online version, meanwhile, Matt shows up, but to Christie's shock, he now has a girlfriend!

Plot: At the second anime convention, Christie is ready to face Matt. She never had the nerve to call him, so this is the first time she will see him since last year. Only problem is, he has a girlfriend with him and Christie isn’t sure what to do. Beyond that, her new artist is more down to earth and in a family where her artwork isn’t supported. When she gets the chance to start working early, she’s not sure she can let her own mother down. Life as a manga artist isn’t easy, as shown by the many artists at the convention. Will Christie be able to show Matt her true feelings, and how can he have a girlfriend?

I really enjoyed this one. I love the problem that Christie is now facing and being herself, she decides to make the best of the situation and try to remain friends with everyone. But Matt’s sister is on the case and knows that Matt is feeling conflicted. I love where the ending left off and I cannot wait to read the last volume where hopefully everything will end “happily ever after”.

Characters: I still love Christie, who has grown up a little since we last saw her. Her new artist is an interesting character as well, who struggles with what it means to become a manga artist. Matt is ever dashing and I love how insecure Christie makes him without even trying.

Final Verdict: A great follow up volume and I cannot wait to see what the next Con holds for Christie and Matt’s relationship.