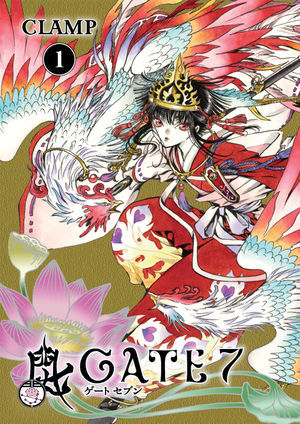 An innocent sightseeing trip to Kyoto opens up a magical realm to shy high schooler Chikahito Takamoto. Visiting a legendary shrine, Chikahito finds himself in the mystical world of Hana and her comrades--and his immunity to their powers leads them to believe that he's no ordinary, awkward teenager! Protecting our world from violent supernatural beasts, Hana and her team welcome the confused Chikahito--who isn't quite sure that he wants to be caught in the middle of their war!

Gate 7 is a series that excited me since I found out that Clamp was writing it. The first in a new fantasy manga series, the main character is a visiting tourist named Chikahito who finds himself transported with three strangers into what looks to be another world. Unsure of why he has traveled with them, they decide to erase him memories, only to be unable to.  Hana is a strange young girl who seems to taken a liking to Chikahito and even gives him a kiss before he leaves to return home from Kyoto.

Months later Chikahito finds himself going to school in Kyoto and back with the same three strangers again. Hana seems to have done something to him to make him return to her. After being offered a place to stay, Chikahito finds himself living with all three of them, still not sure what is going on. They also are unsure of why he can do what he does and what it all means.

I love the illustrations of this artist team and fell in love with the world and characters right away. Hana is so cute and very single-sited when it comes to life, acting very child-like although it is hard to tell what age she should really be. More is revealed slowly throughout the first book about what is going on, but it's obvious there is more to be revealed soon. I'm curious as to how Chikahito is involved in this complicated world with magical beings.

Final Verdict: I'm excited to see where this series is going and will be reading the next two volumes shortly. I love the mix of humor with fantasy that manga always allows for.