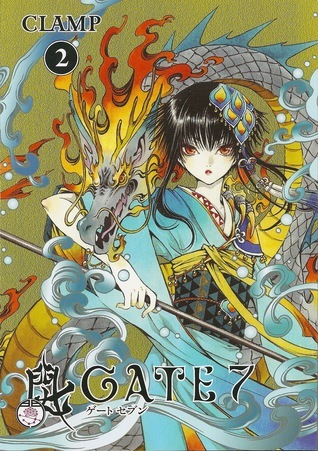 A strange dimension overlaps with our reality, sending magical creatures and bloodthirsty spell casters against the forces of Hana and her team of Earth's protectors. As the newest member in Hana's strange group, awkward high schooler Chikahito Takamoto is looked upon with puzzlement and suspicion. His teammates have no idea how he can be immune to their special powers, and they wonder if Chikahito has any latent powers of his own. Finding himself in the middle of a high-stakes mystical war, Chikahito tries to make sense of the quirky, moody allies he's found himself aligned with and his own feelings for Hana--a strong, short, and awfully cute warrior!

Gate 7 is a series I most likely am giving up on. I usually like Clamp's graphic novels and I really enjoyed the first volume and thought I would get used to the names and references more quickly than I am. Here's the problem, there is a lot of references to Japan's history in this series. There are countless notes at the end of each volume explaining every name in history among other things.

I like the story line, but with the large tie to history and the lack of background knowledge in the time period where all these characters reincarnate from, it is starting to grate on me. As it goes on and more characters are added, I'm sure I will get even more confused. It's sad because I love the illustrations and characters in the story.

Has anyone else read this series and gotten any farther? Does it get any better? I don't think Gate 7 is for me and I'm going to give up after this volume.