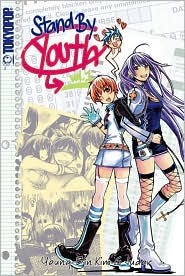 Infatuation needs a study break in this high school romance When a smart student fails his college entrance exam, he is forced to enroll in a class to study for next year's college entrance exam. But when he meets a beautiful girl, studying gives way to romance. But will she give him the time of day?

Plot: Hyungmo is a smart guy, but seems to have the worst luck when it comes to exams. He does so terrible, he has to attend prep classes so that he can do better the next time. Things aren't that simple as he's placed in a class with a bunch of ruffians, sidetracked by a beautiful girl and an old friend enrolls in his classes, distracting him even further. Will Hyungmo be able to pass his classes and move on to college. Or at least get the girl? This first volume ended on a bit of a cliffhanger and has me wanting to read the next one.

Characters: Hyungmo is a bit of an innocent guy, who seems to have terrible luck. Sora is a beautiful girl with a rough home life and possibly not as innocent as everyone perceives her to be. I love the budding relationship between the two characters and hope that they will end up in a romantic relationship later in the series. There's also a possibility of Mina, the cute neighbor girl who keeps popping up unexpectedly and seems into Hyungmo, even if he isn't.

Graphics: I really love the illustrations and think the illustrator Juder does a great job capturing the characters and setting.

Final Verdict: I'm looking forward to seeing where this series is going and see if Hyungmo passes his tests and gets into a relationship.