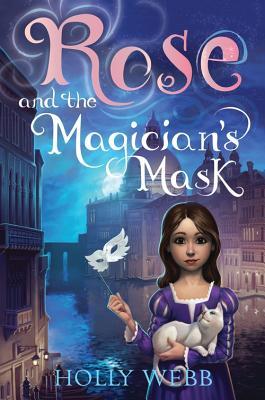 A precious mask of unimaginable power has been stolen from the royal palace. Rose suspects that dark magicians are at work – and that danger looms...

The race to stop the evil thieves will take Rose to the mysterious city of Venice, where nothing is quite what it seems... Can Rose use her magic to find the terrible mask, before its true powers are revealed?

Rose and the Magician’s Mask is the third book in the Rose series, one that easily becoming one of my favorite middle grade series. The beginning of the book spent some time rehashing earlier adventures, reminding me of the evil magician who was thwarted in the previous book, but still on the loose. When a mask of magical importance goes missing, Mr. Fountain, the court magician and Rose’s teacher, must go to Venice to retrieve it. He takes Rose and his other apprentice Freddie with him and his daughter Bella convinces her father to let her come along as well.

Bella is a character that you want to hate, but she is starting to grow up as well as gain more magical abilities. She’s a bit of a spoiled brat, but you can see in this book her intentions are at times more for good than evil. Rose herself starts to grow as well, becoming more confident and wanting to figure out more of her past and who her parents really were. Freddie is also becoming a little less annoying as he grows more used to mixing with other types of people than those with a prestigious background. My favorite character has to be Gus though, the magical talking cat that follows them on their trip and seems to be the one with sage advice whenever it is needed.

I really loved this book and ate it up once they started to travel. The beginning of the book was a bit slow as the reader caught up on what happened previously and getting the character on their way to Venice. There are some new characters introduced and I loved seeing the world of Venice, where many people wear masks until they actually become permanently affixed to their faces. Rose has a moment where she feels as if she wants to give into her own mask, having to wear one for a ball. I thought that was quite a frightening but interesting part of the plot. Overall, I loved this addition to Rose’s story and I’m hoping in the next book there will be even more hints of her heritage.

A magical series that becomes even more so with the setting in Venice, a mysterious and dangerous city. Full of adventure, great characters and a plot to keep you reading this is becoming one of my favorite middle grade series.

One response to “Book Review: Rose and the Magician’s Mask”