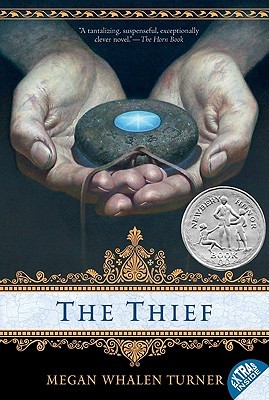 "I can steal anything."

After Gen's bragging lands him in the king's prison, the chances of escape look slim. Then the king's scholar, the magus, needs the thief's skill for a seemingly impossible task -- to steal a hidden treasure from another land.

To the magus, Gen is just a tool. But Gen is a trickster and a survivor with a plan of his own.

Short & Sweet: I was a bit surprised when I started reading this that it was from the POV of a young man – not sure why, but I just assumed it was a young woman. Full of adventure, political intrigue, and mythology, The Thief is a fantastic start to a trilogy I'm dying to read more of.
Final Verdict: Highly recommend picking this one up if you want a story filled with adventure, mythology and a surprising end. I'd recommend this book as 6th grade and up.