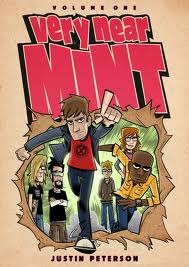 Colin Turner and Sam Jones own a pretty awesome comic book shop, the Splash Page. Business is great, they have a brand new employee, Nate, and Colin's ex-girlfriend Mackenzie is back.

That is, until this week's new comics don't show up. Then things get really complicated and everything starts getting messed up and other important stuff also happens, but we don't want to spoil it for you...

That's what the internet is for.

I love realistic books that turn fantasy part way through, such as Very Near Mint does. Colin and Sam run their own comic book store and are making ends meet until a massive comic book store pops up across the street. What they find out is their worst enemy is trying to put them out of business. The only problem is, who is their arch nemesis and why is he doing what he is?

The characters in this book really made me crack up. The villain is a hilarious rendition of a bad comic book villain and suddenly Colin and Sam need to be the heroes of the story. I really liked the Illuminati in this book and their serious meeting with them only to find it's a group of store owners in the area. I looked up if there was another volume in this series, but it doesn't look like it has been published yet. I'm dying to see what will happen next, will they be able to save the store or will they fall before their enemy?

Final Verdict: A fun and hilarious story with great illustrations and overall left me wanting more.

One response to “Graphic Novel Review: Very Near Mint”